You Think You Know

Last night I came home to a nice bonfire in our backyard. My daughter, her boyfriend, a neighbour and my husband and I circled the fire and engaged in warm conversations. Politics, conspiracy theories, dreams, premonitions, any topic was up for discussion. In the quiet of the night, leaves on the trees held still as if waiting for the next comment or story. As the words flowed between us I gazed up at the almost cloudless night amazed to see so many stars, even at the edge of the city heavy with light pollution.
My attention was drawn back to the circle as my daughter recounted a dream she had when she was 8 years old. Vivid to her still so many years later, she recalled in detail the visions and deep terror she felt. In her dream she knew she was going to die in 10 years a terrible death as air planes crashed into tall buildings. Then the buildings fell. As a child she was convinced she had just witnessed her demise. Her dad tried reassuring her at the time, saying her dream would never come true. In her heart she knew he was wrong and felt discomforted.
On the morning of my daughter’s 18th birthday, 9/11, as everyone sat riveted to televisions everywhere, she knew the day had come. Every day since her 8th year, she counted down time until her for seen death. With tears rolling down her cheeks she recounted how she felt on her 18th birthday. How as she watched her dream play out on T.V. she knew this was her last day on earth.
Before she came to my house for her celebration we made sure we turned off the continuous news and played happy music. Yet when she arrived it was obvious this was not a day she wanted to celebrate. At the time I had no idea she felt complete doom and despair because of her premonition 10 years earlier. I had forgotten about the nightmare, nor did she mention this was why she was feeling strong fearful emotions.
Thankfully my daughter is still around to make us laugh and amaze me with her talents and quick wit. She has given us a beautiful granddaughter and brought her lovely boyfriend into our lives. We have been so much more enriched because she is still on this earth. A true gift.
Even when I think I know someone, my daughter, I am reminded we never know the whole story, ever. I am so grateful that her premonition didn’t come true, at least for her. My heart goes out to those that the nightmare did touch. 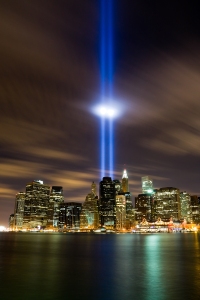